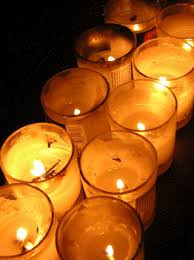 This picture haunts my dreams. It is a picture of Jews being rounded up in the Warsaw ghetto (Poland) just before they were shipped off to the Treblinka death camp.

I see my children's faces in that little boy.

When CM1 was studying the history of immigration in 5th grade they had to dress up as immigrants. They were pretending to go through Ellis Island. Someone put a poorboyhat on his head. It looked just like the hat that boy in the picture was wearing. When I showed up at school, saw what he was wearing,  I removed that hat from his head as soon as I could.

To this day, even though they are grown men, I will not bring one of those hats into my house...

Meanwhile apparently it has become an acceptable part of the political discourse in the United States to accuse Jews who do not agree with the Obama administration's Middle East Policy as disloyal to their country.... read HERE.....

Some nights pictures of little Jewish boys in Poland haunt my dreams.

But today the Jewish people have the arm of the Israel Defense Forces.

Shimon Peres, President of the State of Israel: “The State of Israel of today is not only the only possible memorial standing for our perished brothers and sisters. Israel is a deterrence against any attempt at another Holocaust. A strong Israel is our response to the horrors of anti-Semitism, but it does not excuse the rest of the world from its responsibility to prevent this disease from returning to their own homes.”

Israel is the weapon of the Jewish people to prevent another attempt at genocide against our children. Unfortunately it has become accepted practice to denigrate the Jewish people's right of self-defense. Sadly too many Jews in the United States and even Europe, think by appeasing those that wish to destroy the Jewish people, they will somehow be spared the wrath of Jew-hatred. An Open-letter to the Jewish-American Community: What is wrong with you?

Will the Jews Ever Be Forgiven for the Holocaust?

Meanwhile, read Social Justice, Humanity and Autism....the Holocaust and our children with special needs. As I always say, my sons were twice threatened and twice hated by those who seek to destroy true love and grace in the world. It is why their accomplishments mean more today than ever before.

It is important to remember that before the Nazis came for the Jews, they tried to eradicate the disabled in their midst. So for me this day has a dual meaning, for my boys were twice threatened by this evil society and the complacency of the world...sadly with the lack of respect for the disabled that still abounds and the growth of antisemitism worldwide, particularly the growth of Holocaust denial and Holocaust inversion,  it seems that ignorance and hate never does end. But it doesn't mean we give up the fight for understanding.

As a side note: one in five German highschool students do not know that Auschwitz was a death camp.

KADDISH is the Jewish prayer for the dead. From The Jewish Virtual Library:

The Kaddish is a prayer that praises God and expresses a yearning for the establishment of God's kingdom on earth. The emotional reactions inspired by the Kaddish come from the circumstances in which it is said: it is recited at funerals and by mourners.

The opening words, yitgadal t'yitkadash, were inspired by Ezekiel 38:23 when the prophet envisions a time when God will become great in the eyes of all the nations. The response of the listeners to the first lines of the mourners is a public declaration of the belief that God is great and holy: Yehei Shmei rabba mevorakh l'olam ul'almei almaya (May His great Name be blessed forever and ever). This response is central to the Kaddish and should be said out loud by all present when the prayer is recited.


My recommended books on the Holocaust:

A really good movie is Judgement at Nuremberg. I know that there have been dozens of Holocaust movies since then, but this movie makes more of a statement with its words than most movies do with their pictures.