A Sensible Approach to Traveling with Autism and the TSA

I am guest posting at autistic globetrotting.

We consistently hear about nightmares that people suffer at the hands of the TSA. But I want people to keep something in mind…thousands if not millions of people travel on a daily basis and these intrusive incidents are few and far between. A lot of it has to do being properly prepared. Like it says in the boyscout motto. Ok sometimes that doesn’t’ help either, but in reality being prepared could avoid many issues that people have.

Travel with children who are on the autistic spectrum can seem rather daunting to the best of us. Now with the implementation of airport security we have yet another hurdle to jump over in order to make certain our children have a pleasant trip. Having just returned from a trip this is what we did to prepare for the airport.

Let me explain a little about us. The boys are not boys anymore; they are youngmen, both in college. They are at an age when they can participate in the planning and execution of trip preparation. They are very aware of what it takes to go through security. We traveled extensively right after 9/11 and both boys were consistently pulled out of line and even patted down. They did not mind it. It actually gave them a sense of security. Remember that…you want to make certain your child is left with a sense of security..... 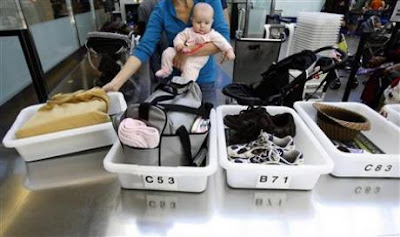